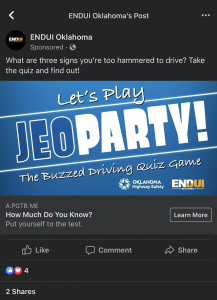 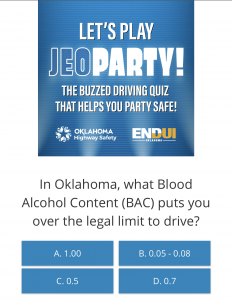 So while scrolling through Facebook today we came across this sponsored post from the Oklahoma Highway Safety Office and the State’s ENDUI program. [pictured at left] It posed the question of “How much do you know?” about DUI in Oklahoma. Well, it just so happens that we know a lot about DUI in Oklahoma. So we couldn’t resist playing their “JeoParty: The Buzzed Driving Quiz Game” *

“A” is obviously incorrect as that’s not an actual BAC measurement. Real BAC measurements are 0.00 up to like 0.19. (yes they are occasionally higher) “B” is not completely accurate because it is perfectly legal to drive in Oklahoma with a BAC of 0.05. The per se DUI limit in Oklahoma is 0.08. So maybe “B” is 1/2 right? “C” is 0.5 which is WAY over the legal limit and likely the person with a BAC of 0.5 is dead from alcohol poisoning. But one thing that’s true is if you happen to be a 0.5 BAC you should definitely not be driving – you should be riding in an ambulance to the hospital. “D” is the same as “C” but even way worse.

So it’s time to pick an option. My guess is the State is incorrectly thinking that “B” is the correct answer so we’re going to pick that one. What do we get? Well, we get this gem of a post from the State of Oklahoma. [picture below] “Correct!” the post exclaims! Spoiler alert… it’s wrong, completely wrong. 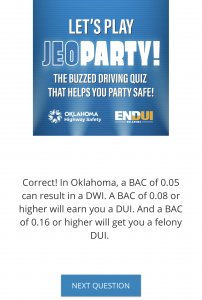 LOL this post could not be more wrong. Who in the heck wrote this thing? I mean they spelled Oklahoma right but that’s about all they got right in it. Let’s break this down.

Well if you hire a lawyer who doesn’t know DUI law then I guess it can result in a DWI but that is NOT the law. In fact, Oklahoma law specifically says 0.05 is legal. “Evidence that there was, at the time of the test, an alcohol concentration of five-hundredths (0.05) or less is prima facie evidence that the person was not under the influence of alcohol;” LINK HERE In other words 0.05 is legal and is considered “evidence” that the person is “not under the influence of alcohol.” When the State of Oklahoma is willing to lie to the public like this it is not hard to see why it is so important to hire an attorney who knows DUI law; like those of us at Lee|Coats Law.

0.06 and 0.07 can, in certain situations, result in a DWI charge. However, it is important to understand that a person is not guilty of DWI merely by having a BAC of 0.06 or 0.07. They must be having driving difficulties in addition to the BAC level. The statute requires “additional evidence that such person’s ability to operate such vehicle was affected by alcohol to the extent that the public health and safety was threatened or that said person had violated a state statute or local ordinance in the operation of a motor vehicle” LINK HERE

Under Oklahoma law, a person’s BAC has nothing to do with whether a DUI is considered to be a misdemeanor or a felony. It’s about if you have prior DUIs, if you are involved in an injury accident, or if you have a minor in your vehicle. A first-time offender who is arrested for DUI and has a BAC of 0.16 should be charged with a misdemeanor – NOT a felony. LINK HERE 0.15 and above will get you charged with an Aggravated DUI but that is still a misdemeanor and is not a felony. If a person is charged with a DUI and has a prior DUI or DUI probation within the last 10 years then they would be charged with a felony. That would be a felony with a BAC of 0.16 and a felony if the BAC was 0.08. It has to do with priors and nothing to do with the BAC level. So again this post is flat wrong.

When the State of Oklahoma is willing to lie about DUI law in a sponsored ad on Facebook you can see why it is so important to hire an experienced DUI attorney. If you or a loved one are in need of a DUI attorney give us a call at Lee|Coats Law. We know what the law is, we know how to force the government to follow the law, and we know how to get you through your difficult time.

* Something else worth pointing out is the word games the State and prosecutors like to play when it comes to DUI. Pay attention to the words the government uses in these public service announcements. They love to use the word “buzzed” instead of “under the influence” or “drunk.” They do this intentionally and with the purpose of making the legal limit sound lower. It is NOT illegal to drink and then drive. No that is not a typo. We will say it again… it is not illegal to drink and then drive. People do this all the time. We go to dinner and drink a glass of wine or a good whiskey with a steak on Friday night and then drive home. That is not illegal. It is illegal to drive drunk. It is illegal to drive under the influence of alcohol. People often say they have a slight buzz before they are actually at the per se legal limit of 0.08. There is no crime of buzzed driving. Only to drive under the influence of alcohol or drive with a BAC of 0.08 or higher. This is just a word game played by the government to make people think the legal limit is lower than what it actually is. Buzzed driving is NOT drunk driving.

Lee | Coats Law PLC is dedicated to providing the best possible legal services for our clients. Conveniently located in Vinita, Oklahoma contact us today to discuss your case.